Henry VII and Elizabeth I shared an interest in maritime explorers and financially supporting them.  John Cabot and his son, Sebastian, were actively sponsored by Henry VII.  Their voyage located Newfoundland for England in 1497 and paved the way for settlements.  John Cabot was lost at sea. The exact dates are unverified but most agree it was around 1500.  Sebastian followed his example with an expedition to North America in the final years of Henry VII’s reign.

Although Henry VIII appointed Sebastian Cabot as cartographer at Greenwich, he was reluctant to sponsor voyages so Sebastian moved on to Spain and set sail under the Spanish flag.

Elizabeth, as is well-known, subsidized trips made by Sir Francis Drake, Sir Walter Raleigh, Martin Frobisher, John Davis and Humphrey Gilbert.  Not all were successful. However failure did not deter multiple voyages from the same adventurers. 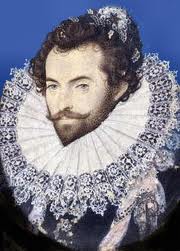 While puzzling over why Henry VII and Elizabeth I, both known to be miserly, would support explorers through investments and patents, I came up with the traditional reasons.  They did it to stimulate England’s economy, to rival Spain in land acquisition and to create a niche as a leading power in Europe.

But, I wasn’t satisfied.  If those were the only reasons, why didn’t Henry VIII actively sponsor exploration?  There had to be more and I believe it is this: Henry VII and his granddaughter shared personality traits with explorers.

Henry and Elizabeth proved time and time again (even before they took over their respective thrones) that they had courage in abundance, adventurous spirits and confidence to overcome obstacles.  Throw in natural curiosity and ‘gambling’ natures and one can see the multiple facets of their kindred spirits with the explorers.

Henry VII and Elizabeth ensured their place in history by sponsoring these men and allying themselves to the explorers’ outcomes.   Although the consequences may not have been immediately evident, it would emerge that the voyages expanded England’s knowledge of the world; cemented England’s presence on the North American continent and the high seas of the Atlantic; realized England’s role in the valuable fishing industry and established England’s wealth based on the commodities and mineral deposits of the claimed lands.