In Henry’s mind, the person thwarting him was Anne. Although she had successfully delivered a daughter and had at least two miscarriages—one in 1534 and one in 1536 that attest to her ability to conceive, Anne’s future and her strength lay in providing Henry with a male heir.  Yet, suddenly, Anne who was used to accompanying Henry wherever he went, remained at Greenwich “while he spent with his courtiers a merry shrove-tide in London” (Friedmann 203).  Henry’s actions were a surprise to many:  that he could leave Anne at this time “when formerly he could not leave her for an hour” (Gairdner X 351).  A man who could not bear leaving his wife for even short increments, was amidst reports that said he was considering leaving her for another woman.  Although earlier in the year of 1536 Chapuys confessed the idea that Henry would replace Anne was “very difficult …to believe”, he would “watch to see if there are any indications of its probability” (Gairdner X 199). 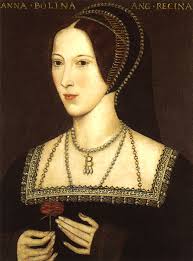 In Transactions of the Royal Historical Society: Volume 5, Steve Gunn succinctly discussed in the introduction to a chapter, “The Structures of Politics in Early Tudor England” the recent historiography of the state of Henry and Anne’s marriage, her miscarriage and her fall.  Astoundingly, a great deal has been written, conjectured and surmised based on the scant surviving records and the conclusions have altered through the years. Here is what Gunn has to say:

For discussions on the theory of Anne’s trial and court factions, see the blog entries Path to St. Peter ad Vincula:  Part IV and Part VI.  As for the miscarriage, this blogger does not agree with the theory that Anne’s last pregnancy ended in anything other than a miscarriage. If there had been a deformity in the fetus, contemporary sources would have mentioned it and Anne’s enemies would have latched on to it as evidence of her wickedness.  Perhaps the idea of a deformity stems from the phrase by Nicholas Sander “a shapeless mass of flesh” (Sander 132) as contemporary sources claim otherwise. 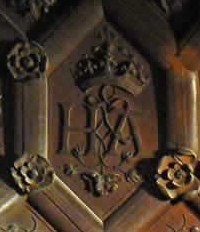 A poem, Epistre Contenant le Procès Criminel Faict a l’Encontre de la Royne Anne Boullant d’Angleterre (A Letter Containing the Criminal Charges Laid Against Queen Anne Boleyn of England), was summarized in dispatch papers 2 June 1536.  Referred to as a “poem descriptive of the life of Anne Boleyn, composed at London”, it was written by Lancelot de Carle (also spelled Carles) while serving as secretary to the French Ambassador in England, Antoine de Castelnau (Gairdner X 1036).

Published in Lyon in 1545 for Dauphin Charles, the poem had been in circulation prior to that.  In fact, it was mentioned in a correspondence by Henry VIII to his Ambassador to France, Stephen Gardiner, 12 June 1537, after de Carle returned to his native country.  Gardiner was told that Henry, “on having first knowledge of the book and the malice of it” which was “written in form of a tragedy,” was grieved “as sundry copies and impressions of it have got abroad.” Henry urged “that all copies be taken in and suppressed” (Gairdner XII ii 78).

Certainly this could be a different work, as a year interval from the time it was mentioned in dispatches to the time Henry made attempts to restrict its circulation appears a bit long.  Yet, it is feasible that the king was not made aware of it until after Carle completed his diplomatic mission.  With the author being identified as Carle—writing during the time he was “attendant upon the French ambassador” it seems to indicate it was the same poem (Gairdner XII ii 78). 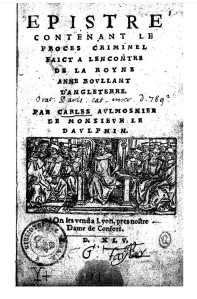 Title page of the poem by Lancelot de Carle

The poem was brought to this blogger’s attention as a footnote in G. W. Bernard’s biography, Anne Boleyn: Fatal Attractions, under “Chapter 8:  Anne’s Miscarriage.”  Although one cannot be too trusting of the poem’s historical accuracy, a portion of it –the part summarized in dispatch papers as “Anne met with divers ominous occurrences … the King had a fall from horseback which it was thought would prove fatal, and caused her to give premature birth to a dead son” will be where we direct our attention (Gairdner X 1036). In the poem, lines 324-326 refer to the ‘beautiful boy’ that was born before term.  A translation follows:

The stressful conditions that Anne was under not only to provide a son but to literally survive due to the factions at Court had her “worn out by constant exertion and anxiety” and were enough to jeopardize any pregnancy (Friedmann II 138).  Add in the equation the simple fact that the successful birthrate in the 16th century was not high plus the possible medical conditions of Anne and Henry (the Rh factor for her and diabetes for him) and the loss of an infant does not seem implausible.  Whatever the cause of the tragedy, the outcome was felt on the familial level, on the national level and on the international level.

For References please refer to the blog entry Path to St. Peter ad Vincula- Part I