Elizabeth’s ability to have children would surface in all marriage negotiations no less those for her alliance to the Hapsburgs.  As early as December 14, 1558, de Feria’s diplomatic assessments to King Philip, the potential bridegroom, were determining that Elizabeth would be “more likely to have children on account of her age and temperament”, than Mary (Hume Simancas: December 1558 4).  Surprisingly, in a short amount of time—April 1559—the evaluation had changed. Now with Philip’s proposal rejected and an Archduke put forward as candidate, de Feria informed his king that

“If my spies do not lie, which I believe they do not, for a certain reason which they have recently given me I understand she will not bear children” (Hume Simancas April 1559 29).  Bishop Quadra continued this premise in January 1561 in a letter to Philip, where he disrespectfully referred to the Queen as ‘this woman’. He stated that he “must not omit to say also that the common opinion, confirmed by certain physicians, is that this woman is unhealthy, and it is believed certain that she will not have children, although there is no lack of people who say she has already had some, but of this I have seen no trace and do not believe it” (Hume Simancas January 1561 122).

A Hapsburg Archduke Should Do the Trick

Philip’s next move was to get Elizabeth to marry a Hapsburg archduke.  Gómez Suárez de Figueroa, Count de Feria, was recalled to Spain upon his request but for several months in the spring and early summer of 1559 attended Court with his replacement.  For this particular assignment, Philip sent his newly-appointed ambassador, Alvarez de Quadra, Bishop of Aquila, to discuss the situation with the Queen.  As with de Feria, Philip received a detailed report of all that transpired.

When approached by the Bishop, the Queen began to “talk about not wishing to marry and wanted to reply in that sense” to which de Quadra “cut short the colloquy” to assure Elizabeth he did not want an answer.  Talks continued with Cecil concerning the various marriageable candidates from Austria.  Cecil implied that had it not “been for the impediment of affinity the Queen would have married your Majesty [Philip], but the matter involved religious questions….” The Bishop had no qualms to stop this course of discussion either as “it would be fruitless now to discuss as the offer had fallen through” (Hume Simancas May 1559 35).  The Ambassador interpreted the message as being the Queen’s way to secretly show interest in marrying, despite protestations that she would remain unwed. 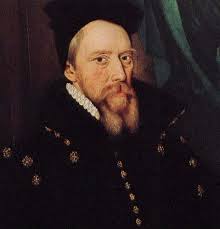 He returned to the discussion with Elizabeth to encourage her to see that “in a matter of this gravity touching the welfare and tranquillity of their kingdoms and those of their neighbours kings and queens could not always follow their own desires to the prejudice of those of their subjects without doing great wrong and grievous sin, and therefore she should not consult her own inclination about her marriage but should look at the ruin that would come to her country by her doing so” (Hume Simancas May 1559 35).   He said he wanted “to clear the ground and find out whether all this means a desire not to marry at all or simply to avoid a Catholic husband…”  Holding on to his patience, de Quadra listened as the Queen “went back again to her nonsense and said she would rather be a nun than marry…. We continued at this for some time wasting words and at last she said she was resolved not to marry except to a man of worth whom she had seen and spoken to”  (Hume Simancas May 1559 35).

When Elizabeth had learned Philip had signed a marriage treaty with Elisabeth of Valois, daughter of Henri II of France, she pretended to be annoyed.  After teasing Philip for being fickle and not being enough in love with her to wait longer for a conclusive answer to his proposal, Elizabeth herself was willing to listen to the Austrian proposal within a few short weeks.  The German and Spanish Ambassadors presented the idea formally to the Council.  Bishop Aquila reiterated an alliance between the Hapsburgs would please Philip not only “on account of the Queen’s own happiness and the welfare of her subjects, but also in the interest of the lasting alliance and union” (Hume Simancas May 1559 35).  Perhaps more to assure himself, de Quadra stated that “ so clearly is the need for her to marry being daily more understood by herself and her advisers, notwithstanding her disinclination to say yes, I need not despair of her listening to the proposal” or her councilors being receptive to it (Hume Simancas May 1559 35).  Despite this bravado, de Quadra could not definitively state her intentions.  He confessed to his King, “I am not sure about her for I do not understand her” (Hume Simancas May 1559 35).  She had him just where she wanted him. 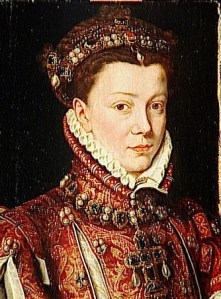 Count de Feria, in one of his final letters to Philip, defended the queen in the negotiations concerning the Hapsburg match by saying he believed she approached the offer openly.  Yet, his confidence was not solid when he confessed, “although to say the truth I could not tell your Majesty what this woman means to do with herself, and those who know her best know no more than I do” (Hume Simancas April 1559 27).

Formal introductions of Alvarez de Quadra, Bishop of Aquila as future Spanish Ambassador to England were part of the 12 April dispatches to de Feria from Philip II.  Included was the news that although Philip did not marry the English Queen, the Holy Roman Emperor, Ferdinand I (Philip’s uncle) was interested in putting forth one of his sons as candidate.  Philip agreed to “promote and favour” either nephew. Believing that it would be “very good for all parties” (Hume Simancas April 1559 25).  Count de Feria was to get an audience as soon as possible with the Queen to let her know that Philip agreed to the idea of her marrying a Hapsburg Archduke.  The Ambassador was to “tell her that as the love I bear her is that of a good brother, I am always thinking of what will conduce to her welfare and the stability of her kingdom…”  (Hume Simancas April 1559 25).  Still not letting go of the possibility of the English making a complete conversion to Catholicism, Philip was adamant for his Ambassadors to ensure she accept the proposal and gave multiple reasons for the “good feeling which have prompted me to propose it” (Hume Simancas April 1559 25).

Philip was persistent in expecting the English to continue to see him with gratitude and as rescuer.  He instructed de Feria on April 24th to deliver a letter to Elizabeth telling him that its purpose was so that “they may understand thoroughly that they are ruined unless I succor and defend them…when you have frightened the Queen about this …you will assure her from me that I will never fail to help her in all I can to preserve her realm and settle her own affairs exactly the same as if they were my own” (Pryor 31).

Philip’s message was clear in the letter written to Elizabeth.   As seen in the translation from the Spanish of line 11, he wrote, “…this business affects nothing less than the safety of your kingdom, and you may be assured that in this as in any other matter which affects you I shall be as attentive as I have been in the past…” (Pryor 31). 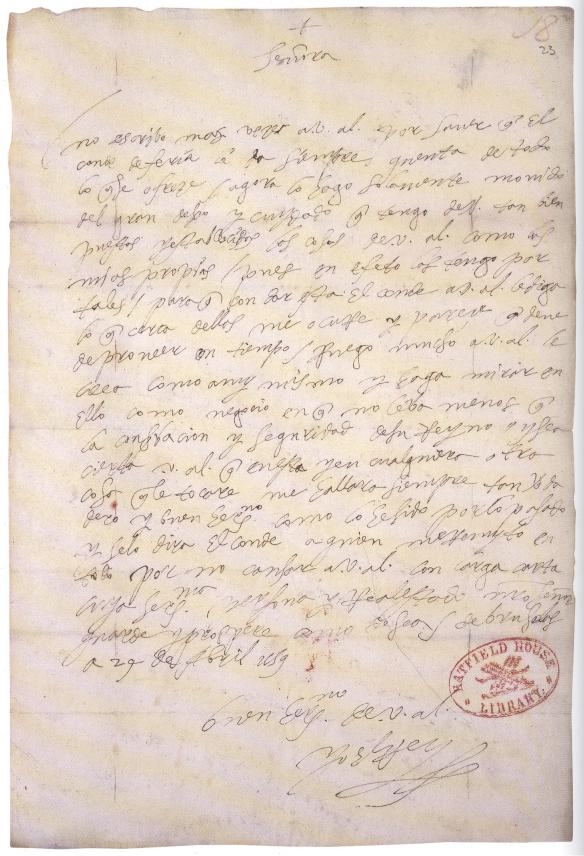 Letter to Elizabeth from Philip II in Spanish from 24 April 1559.

Elizabeth acquired the letter on the 28th and very soon after de Feria sent off a dispatch to his king assuring him that he “tried to frighten her” and that she had “answered amiably” and “she thanked your Majesty for your message.”  Then the Count was told by the Queen that England would pass Protestant settlement legislation.  A dispirited de Feria grumbled, “It is very troublesome to negotiate with this woman, as she is naturally changeable, and those who surround her are so blind and bestial that they do not at all understand the state of affairs” (Pryor 31).

For references, please refer to the blog entry “Two’s Company, Three’s a Crowd: Part I.”