Ambassador Chapuys was comfortable with sharing any and all versions of the truth that reached his ears.  According to the Spaniard, Henry was declared the lover of Mary Boleyn and her mother, Elizabeth; Anne was declared the King’s daughter; Elizabeth was declared Norris’s child; and, Protestantism was declared responsible for the loose morals which led to these scandals.  In fact, Chapuys reported to Bishop Grenville on May 19, 1536, that the religious leaders Anne promoted “persuaded the Concubine that she had no need to confess, she grew more audacious in vice; and, moreover, they persuaded her that according to the said sect it was lawful to seek aid elsewhere, even from her own relations, when her husband was not capable of satisfying her” (Gairdner X 909).  This was quite a condemnation to brandish about the international diplomatic community while encouraging the English peoples in the belief that “isolation and danger of England was all laid to her account” (Froude 386).

In this accusatory atmosphere, Henry turned his attentions completely toward Jane Seymour.  “She was not witty either, or brilliant; but she was modest, quiet, with a strong understanding and rectitude of principle” (Froude 441-442). These qualities appear to have been what attracted her to the King. “Jane seems to have had no enemies, except Alexander Aless [a Scottish Protestant divine who was on the fringe of the events of 1536] who denounced her to Luther as an enemy to the Gospel, probably because she extinguished the shining light of Anne Boleyn” (Pollard 347). There was “no sign that she herself sought so questionable an elevation. A powerful party in the State wished her to accept a position which could have few attractions, and she seems to have acquiesced without difficulty” (Froude 444).  For a more detailed account of Henry’s relationship with Jane at this juncture, see the blog entry Path to St. Peter ad Vincular Part VI-E.

Not surprisingly, Eustace Chapuys played both angles.  Although he did write to Charles V that Henry’s pursuit of Jane while Anne was still alive and imprisoned “sounds ill in the ears of the people” (Gairdner X 908).  He addressed Henry with great sympathy assuring the King that he had been blessed, as many “great and good men, even emperors and kings, have suffered from the arts of wicked women.”  The Ambassador felt it was “greatly to Henry’s credit that he detected and punished conspiracy before it came to light otherwise” (Gairdner X 1071).

The conspiracy was the adultery committed by Anne.  Surprisingly, Henry dissolved their marriage two days before her death, yet, executed her for adultery.  Why divorce her “when the sword divorced them absolutely” (Gairdner XI 41)? There never was an official reason for the divorce.  No mention was made of the cause for the dissolution of the marriage except that it was the “consequence of certain just and lawful impediments which, it was said, were unknown at the time of the union but had lately been confessed to the Archbishop by the lady herself” (Wriothesley 41).  Therefore, Anne’s reputation was further sullied.  The implication was that the Court did not know of the impediments to her marriage to Henry but she most certainly did and had gone through with it anyway.  Archbishop Cranmer urged Anne to face the marriage tribunal “that it might be for the salvation of their souls” (Wriothesley 40).

As mentioned in the blog entry,Path to St. Peter ad Vincula-Part VI-F, if Anne and Henry were never legally married then it is impossible that she could be tried and executed for adultery.  Yet, her reputation was such that stories such as these were given credence.

With such an attitude toward Anne, observers had their theories for the divorce.  As previously shown, Thomas Wriothesley, Earl of Southampton, believed it “was a privie contract approved that she had made to the Earle of Northumberlande afore the Kings tyme, and she was discharged, and never lawfull Queene of England” (Wriothesley 41).  Chapuys wrote to Charles V that he had “been informed that the said archbishop of Canterbury had pronounced the marriage of the King and of his mistress to have been unlawful and nul in consequence of the King himself having had connexion with Anne’s sister, and that both he and she being aware and well acquainted with such an impediment, the good faith of the parents could not possibly legitimize the daughter” (Gairdner X 54). “The statute declaring the Concubine’s daughter princess and lawful heir has been repealed, and she has been declared bastard” (Gairdner XI 41).   As an aside here, Henry never disowned Elizabeth, he believed her to be his daughter, and he simply wanted her declared illegitimate to ensure that any issue (meaning sons) from further marriages would be the legal heirs. 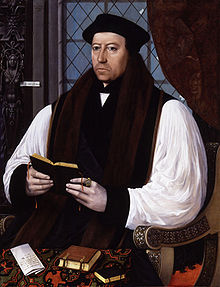 No official record emerged with an actual description for the impediment.  Did the Council members appeal to Parliament to trust their conclusions and pass the statute to end the marriage (which was done in June after Anne’s execution)?  Was Henry’s goal to illegitimate Elizabeth and ensure any children of successive unions the right to the throne?  Either a pre-contract or consanguinity would have proved effective for that purpose.  So even Anne’s divorce was cloaked in intrigue and the information presented with it was designed to throw further guilt and suspicion upon her.

“On the day of the execution, Henry the Eight put on white for mourning, as though he would have said, ‘I am innocent of this deed:’ and the next day was married to Jane Seymour” (Ellis 66).  Although his wearing white was corroborated in other sources, it appears as if Henry held off marrying Jane Seymour until the end of May although they were pledged on May 20, 1536. Imperial sources claimed that after hearing of Anne’s execution, Henry “entered his barge and went to the said Semel [Jane Seymour], whom he had lodged a mile from him, in a house by the river” (Gairdner X 926). Before Anne’s death many at Court knew there was “no doubt that he will take the said Semel to wife; and some think the agreements and promises already made” (Gairdner X 908). Archbishop Thomas Cranmer (who signed official documents from Lambeth as from Lamehithe by T. Cantuarien was listed as the source in this document as T. Cantuarien) delivered the official dispensation document on May 19, 1536, allowing “Henry VIII and Jane Seymour, to marry, although in the third and third degrees of affinity, without publication of banns” (Gairdner X 915). 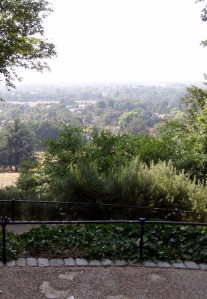 According to tradition, Henry VIII stood at this spot in the park of his Hunting Lodge at Richmond when Anne Boleyn was executed.

Ambassador Chapuys wrote on May 20th to Cardinal Granvelle that he had been informed “that Mrs. Semel came secretly by river this morning to the King’s lodging, and that the promise and betrothal (desponsacion) was made at 9 o’clock” (Gairdner X 926). Chapuys knew that something was afoot as Henry had called for “Parliament to commence on the 8th proximo….” Chapuys held hope that “the Concubine’s little bastard will be excluded from the succession, and that the King will get himself requested by Parliament to marry” (Gairdner X 926).  Jane Seymour was Henry’s obvious choice despite his implying to foreign diplomats, especially Chapuys, that he would select a bride from the continent.  Chapuys did not fall for Henry’s pretense knowing that “to cover the affection he has for the said Semel he has lodged her seven miles hence in the house of the grand esquire, and says publicly that he has no desire in the world to get married again unless he is constrained by his subjects to do so” (Gairdner X 926).  The charade fooled no one. “The great concerns of nations are of more consequence to contemporary statesmen than the tragedies or comedies of royal households.  The great question of the hour was the alternative alliance with the Empire or with France” (Froude 403).  “To the Catholic she [Anne] was a diablesse, a tigress, the author of all the mischief which was befalling them and the realm.  By the prudent and the moderate she was almost equally disliked; the nation generally, and even Reformers like Cromwell and Cranmer, were Imperialist:  Anne Boleyn was passionately French” (Froude 385).  By marrying Jane Seymour, Henry put an end to the marriage machinations of the Empire and France.

On 30 May 1536, the “weke before Whitsontyde the kyng maryed lady Jane doughter to the right worshipfull sir John Seymour knight, whiche at Whitsontyde was openlye shewed as Queue. The viii. day of June the kyng held his high court of Parliament in the whiche Parliament the kynges two first manages, that is to say with the lady Katheryne, and with the lady Anne Bulleyn were both adjudged unlawful” (Hall 819).